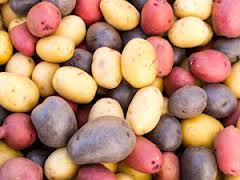 As we are taking the potato pretty seriously, it is worth taking a moment out to consider different varieties. New will always be best when they are freshly dug, hence the reputation of the Jersey Royal which used to be delivered to London for the Queen’s birthday on April 23 but just as good can be a Maris dug up in mid july. It is logical to conclude that the fresher the potato the more nutrients they will contain which they will lose in storage through the winter. If you had space to grow just one vegetable, then the potato would be the obvious choice.

As we are chiefly interested in potatoes that bake and steam, the Jersey is supreme in the first part of the summer.

Then comes the yellow fleshed Wilja and Estima both boil well. The red skinned Desiree and Romano are dependable, although some people say they do not mash neatly. The commonly found main crop Maris Piper are worth their place, King Edwards though tend to collapse with boiling (fine for mash), but bake well. Yukon gold are a kitchen favourite.

All the salad potatoes will be good plain steamed – pink fir, charlotte, ratte, and go well alone, hot or cold, sauced or not.

Sweet potatoes are of course not potatoes, but they are highly alkaline.

The potato has been much maligned in recent years, fried and battered into chips, shaved into crisps, usurped by noodles and rice, its reputation as a beneficial food in the diet is under assault from all sides. A poll might even suggest that most people believe the potato is fattening. Well it is not, unless it is fried.

A 200 gram or eight oz serving of potato, boiled, steamed, baked whatever = 160 calories or so, or 1/20th of a daily intake. Mashed with butter, milk, virgin olive oil hardly doubles that. The equations change dramatically with cooking. The same amount of crisps would be 500 calories. And if the oil is not hot enough, then the potato does not seal properly and will saturate yet more fat.

In practice the potato is a reliable alkaline standby, that old student baked potato, a cliche but none the worse for it. Potato is just 0.8% fat. It has as much vitamin c as a glass of tomato juice and as much iron as an egg, according to Lindsey Bareham’s encyclopaedic recipe book In Praise of the Potato. It is also a significant source of the metabolsing vitamin b6 and potassium.

It compares suprisingly perhaps better than rice, or white rice at least which loses much of its virtues in milling and nutritionally speaking is really just a makeweight filler.

All the sugars here come from the vegetables which should be chopped small and neat to cook quickly.

Bring a large pan of water to the boil…

Simmer covered for 30 minutes  and leave to infuse