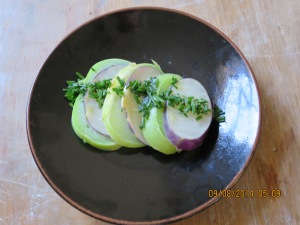 KOHLRABI get their funny name from the German.  It is a cabbage (kohl) turnip (rabi). Seemingly no one in England or America could be bothered to give it a better name which is a bit remiss. But it is popular (Wiki says) in German speaking countries, also in India, especially Kashmir, although here its wild manically waving fronds it is a bit of a novelty still. As you can see (for any newbies like us)  it is green or purple though usually the rinds are taken off – but the leaves can be treated like kale. Here I just sliced and steamed them for 10 minutes and plated them with chives which they seem to like. You can also chop it up small and have it raw in a salad with cucumber and lettuce.

Amazingly they have more vitamin C than oranges and are generally regarded as a super super food…a point reinforced by their fresh crispness, almost a cross between apple and turnip, or a turnip that has reached puberty perhaps, voluptuous 🙂